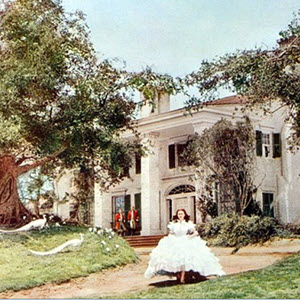 This past Saturday it was my pleasure to meet some folks from Austin, Texas; Birmingham, Alabama and Atlanta, Georgia “up at the gate” as they came for a tour of the Tara façade. Each person had their own reason for coming and thus their own connection to the story (book and/or movie) and I was once again reminded of the “Gone with the Wind Pilgrimage” I created over fifteen years ago. The crowd that showed up for that weekend program of all things GWTW many years ago were as different as oil and water and mixed just about as well.

The group consisted of those who studied the life of Margaret Mitchell and read everything she wrote (from books to grocery lists..) Twice! There were those who sought to go back in time to the “land of cavaliers and cotton fields” and thus arrived ready to don their antebellum finery and dance the reels until dawn. Others were intrigued by the stories I had found and how the truth was tied together in Margaret’s work of fiction…and then there was the group who took every opportunity to pick magnolia leaves and fill mason jars (that I provided) with “handful’s” of red clay to take back to their homes in the hinter lands.

Saturday I had the same mix of personalities and interest, but the tour has gotten longer since those days of the “pilgrimage” and the groups are forced to absorb not only a goodly number of the true stories and connections that I have been sharing all these years but the added opportunity to stand in front of the Crawford-Talmadge House and hear of the Crawford ladies who took down their draperies in January of 1865 and fashioned themselves new dresses as the war wound to an end. They can “see” Mrs. Betty (thru my stories) as she and her helpers unloaded a bailed pine straw trailer full of the pieces of the Tara façade in 1980. They can understand the closeness of the Fitzgerald property (Margaret’s family’s plantation) to the Crawford-Talmadge Plantation and thus why folks in the area referred to Crawford-Talmadge Plantation as “Twelve Oaks” (since Margaret said Fitzgerald’s was her Tara). And they can take the same short walk across the feed lot that has been taken by Kings, Princes and Hollywood’s elite as they stopped to pay their respects to Tara.

The folks seemed to enjoy themselves very much and…so did I. For the truth of the matter is that I love telling stories and the true stories of Gone with the Wind combined with the stories of how all of this converged on a patch of ground south of Atlanta….and how a 75 year old movie set has survived the trip from Hollywood and the storage in two old barns …is too much to tell in one sitting. And so I hope to spend some more mornings in the cool shadows of the Crawford-Talmadge Plantation telling the tales of a time gone by (the history), a time recounted (the true stories in the book and movie) and a trailer load of Tara (the Saving Tara Project).

Unless God has other plans, the project will continue and the tours will be available later on in the season but until then keep coming back for more stories, more books and more opportunities to share that Tara still stands at the end of the road and that she continues to welcome those who have made the hard ride from the battlefields of Atlanta…to home.

Since the start of the Saving Tara Project there have been some who decried what I was doing, they … END_OF_DOCUMENT_TOKEN_TO_BE_REPLACED