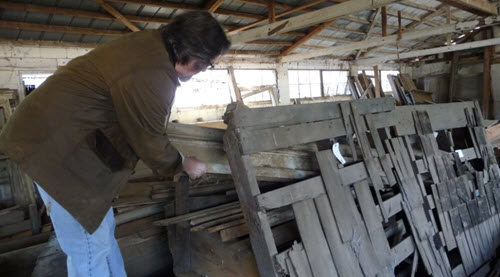 In response to a recent comment by a reader that Tara, “was never built and was just the front door of Selznick’s Office” (a false statement that I quickly corrected) I thought it best to post my thoughts and my proofs of the FACT that Tara was built. And thus the reason it is so important to continue the work of its preservation and presentation.

Although Twelve Oaks was never more than a few pieces of interior and painted glass and movie still, all it takes for someone to KNOW that Tara was built as a three sided façade (meaning there were no rooms or furnishings inside) on the back lot of Selznick’s Studio and filmed there in 1938-39 is to peruse the myriad of books and photos that fill the internet. The late Herb Bridges published a number of books regarding the creating, casting and filming of Gone With the Wind and the recent publication of the collection of the University of Texas Harry Ransom Center entitled The Making of Gone With the Wind should put any doubt to rest that there was a wooden structure built, covered with brick tile panels and anchored with four massive (real) brick columns. But was it covered by other building fronts after Gone with the Wind? Was it converted to a cowboy saloon or a brothel? Or did it stand as the home of the Barkly’s in the Big Valley or Ponderosa for the Cartwright’s?

The truth is that Tara was not used in other films or television shows (including but not limited to the Big Valley and Bonanza) It was occasionally seen in the back ground or in passing or on travelogues. Desi Arnaz, the new owner of the back lot filmed a helicopter tour with “Fred and Ethel” and Tara was noted as they flew by. The fact that Tara was so distinct and well known made it hard for Hollywood to keep it as a tour site and yet disquise its looks enough to be reused on other projects. In fact the western cereal, the Texan with Rory Calhoun shot nearby and eventually felt the need to put up a stockade fence across the front door (look for The Texan on you tube and watch for Tara in the background).

So in 1959 Desi Arnaz made the decision to have Tara dismantled and removed so that the space could be used to build the set of Stalag 17 for Hogan’s Heroes. At that time Desi gave the set to Julian Foster, of Georgia who removed the windows, doors and side porches and brought them to Atlanta with the hopes of building a museum where its story originated in Margaret Mitchells book. The rafters and veneer covered with brick tile were in such poor shape as to be left behind on the Hollywood lot and burned. The brick columns on Tara’s front porch as well as Tara’s brick porch floor were real and thus required a bulldozer and a large pit to dismantle and dispose of the last remnants of the O’Hara’s home.

Foster did not leave Hollywood without bringing along lots of never before published photos of Tara’s dismantling, affidavits and documentation to show that he was the owner of Tara from the movie Gone With the Wind. These documents, statements from those who created Tara and the long line of photos are all part of the files kept by Mrs. Betty Talmadge who bought the Tara façade in 1980 and brought it to her farm in Lovejoy in hopes of creating the museum that Tara always deserved, and the fans always longed for.

Today, I do not spend much time debating with those who claim this is some trick,….the evidence is extensive and the reason for its time in the barn well documented. I hope very soon to move the pieces of this, the most iconic movie set in the world into a bigger and better building on the property so that all who desire may come, unfettered to the location of Tara….To the “land of cavaliers and cotton fields” which spawned Margaret Mitchells book and now shelters the movie set that David O. Selznick was inspired to create.

There will be more tours set for the coming months and soon an opportunity for those who claim such a fascination with it all to donate to its transition.

Since the start of the Saving Tara Project there have been some who decried what I was doing, they … END_OF_DOCUMENT_TOKEN_TO_BE_REPLACED