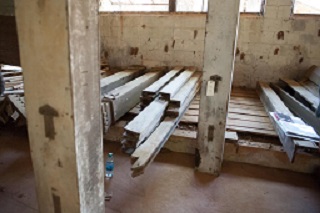 Prior to beginning the work of the preservation and presentation of the Tara façade that had been stored in the Talmadge barn for so long, I knew little of its construction. Sure I knew it was not a complete house but a three sided shell that had sat on the back lot of Selznick Studio in Hollywood (NO filming was done on GWTW outside of Hollywood) . I had heard from my friend, Fred Crane (Brent Tarleton) that the bricks appeared to be Paper Mache. Another source claimed that the house was kept so long on the back lot because it was used as the Barkley’s home in “The Big Valley” and was seen in episodes of Bonanza. But as I waded into the old barn full of go carts, lawn furniture and plumbing fixtures…and the most iconic movie set of all time, the rumors, stories and half-truths faded away as I sorted thru the pieces of Tara.

Today the go carts are long gone. The lawn furniture and plumbing fixtures that are visible in the first youtube videos of me in the barn have long ago been moved to another part of the farm. Over the last year the trash has been removed, the floor has been swept (more than a dozen times) and the pieces of this, the most iconic of all movie sets has been arranged and rearranged. I have built cradles (or flats as they say on Broadway) for some of the windows and doors, a portion of the side porch has been set up and there is some order to the madness that was once the order of the day amid pieces of wood piled helter-skelter in that old barn.

So today, after the recent showing of the “making of GWTW” on TCM I thought it might be best to share what has been learned from Tara. Keep in mind that the things shared here were not available to those who made the documentary as Tara was never videotaped or toured until I showed up…so all previous documentaries will be lacking knowledge of the central piece of the story. I hope to remedy the lack of information on Tara by shooting video in the near future (after all I have the equipment and the stories I just need a crew…hint, hint) but for now we will just have to make do with a few stills and my story here on the blog.

To date I have verified that Tara was simply a three sided façade. Yes, I know if looks like a real house (which was what the studio wanted it to look like) but the building was built out of 2×4’s covered in a thin veneer akin to plywood. This plywood was covered with a wire mesh (I have found traces) that created a way to “hang” the fake brick. That’s right, the bricks were not real bricks, but they were NOT Paper Mache either (sorry Fred). I found a couple of bricks under the roof molding and they matched those in Betty Talmadges file. They appear to be constructed out of clay and straw and horse hair and were created in long sheets attached to the plywood. This plywood was then attached to the 2×4 skeleton and….you have a (fake) brick house. The only real brick found on Tara was in the two story columns on the front along with its front porch floor. That’s explains why the frame of Tara was burned and the columns were buried when it was dismantled in 1959.

Today in the dairy barn one can see the tall shuttered windows from the front porch of Tara, and all but one of its other window openings and shutters. The side porch, doorway and columns are still intact and ready to be reassembled. The cathedral window that stood behind Scarlett as she façed off with the Yankee deserter is partially reassembled and standing amongst its fellows. Even the shutters that were seen in Tara’s office, Mrs. O’Hara’s death scene and the most memorable of all,….the green velvet drapes scene still exist and still show some of the original paint.

So Tara still exists and is available to those who take the time to come and look….but that can be said of most things in life. For my friends few of the great moments come to us while we wait for it on the back porch.

Since the start of the Saving Tara Project there have been some who decried what I was doing, they … END_OF_DOCUMENT_TOKEN_TO_BE_REPLACED