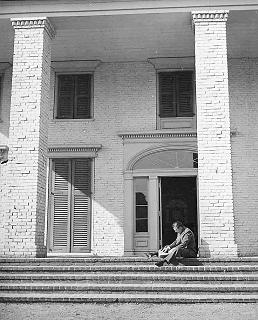 Saturday morning I had the opportunity to meet some more of the folks who read my posts as they showed up in force outside the gate to take the Tara façade tour. Before we head inside the big gate I usually thank the folks for coming and, by showing up and paying their fee, establishing the worth of such a tour. Yes, it is that simple, when people open their wallets and hand over some of their hard earned cash they are saying (with their money) that they feel the presentation is worth the cost.

But it seems no matter how many folks we have visiting our site on a regular basis and reading my posts on facebook and on the blog site at savingtara.com,….there are still those who don’t know (or believe) that Tara still exists. They seem to be totally clueless to the story of how the Tara façade was shipped to Atlanta in 1960 and how the plans for a museum didn’t pan out and so Tara was stuffed into a barn north of Atlanta for twenty years until it was bought by the wife of Senator Herman Talmadge (Ms. Betty) and she brought it to her farm in Lovejoy and began the work of restoring the front door, inventorying the other pieces and campaigning for a museum to house both it and the Fitzgerald House that she acquired not long after Tara.

Not knowing this wonderful tale even though it wasn’t done in secret. Desi Arnaz and Lucille Ball sent Tara packing in 1959 so they could build the set for Hogan’s Heroes. When Tara arrived in the care of its new owner (Julian Foster) the movers and shakers in Atlanta threw a big welcome home banner outside the state capital and they all made a speech. When Ms. Betty bought the Tara façade from Foster and moved it in 1980 she did not do it under cover of darkness. And although she did not advertise it since there was no fence around her property and no lock on the dairy barn at that time, she had the front door restored and loaned to the Atlanta History Center for the 50th anniversary celebration of the Premier of the movie in Atlanta,….another moment captured by the media (just google it). And the media coverage did not stop there for there was always a required story and rehashing of events when another suitor from an “Historical Society” tried and failed to buy the façade and set up a museum.

Over the years the Talmadge Plantation has played host to dignitaries and Kings and on many occasions they wanted to travel down to the barn to look on the iconic set. In fact just the other day I played host to a group that included one of Ms. Betty’s staff who remembered being at a party on the grounds and looking up to see Lucille Ball and her husband (Gary Morrison) enjoying a walk amongst the magnolias. So, as I have stated to the vast group of media inquiries that I have fielded since I began my work on the facade, “this was the worst kept secret in Atlanta”.

But how do we change that? Do we require the government to march everyone down to the court house and recite the tale of Tara? Do we get a bunch of protestors to block traffic somewhere with the hope that enough bad press will give us good press,….and thus notoriety? Or do we just continue to share the story to whomever will listen and do we film the story so that it can be seen around the world?

Well my course (for as long as I have the helm) is to keep writing these missives and sharing the tales, film the façade in all angles and tell the story so that the world can hear, and be entertained and inspired by the passion that reached from the battlefields of Atlanta, to the heart and hands of a native daughter who created a story worthy of a Hollywood blockbuster.

There is but one more tour scheduled over the next few months and it is next Saturday, August 22 at 9:00 AM. I hope many of you will take advantage of it by contact me at peter@peterbonner.com or thru facebook.

Since the start of the Saving Tara Project there have been some who decried what I was doing, they … END_OF_DOCUMENT_TOKEN_TO_BE_REPLACED